Failure is a Never-Ending Opportunity 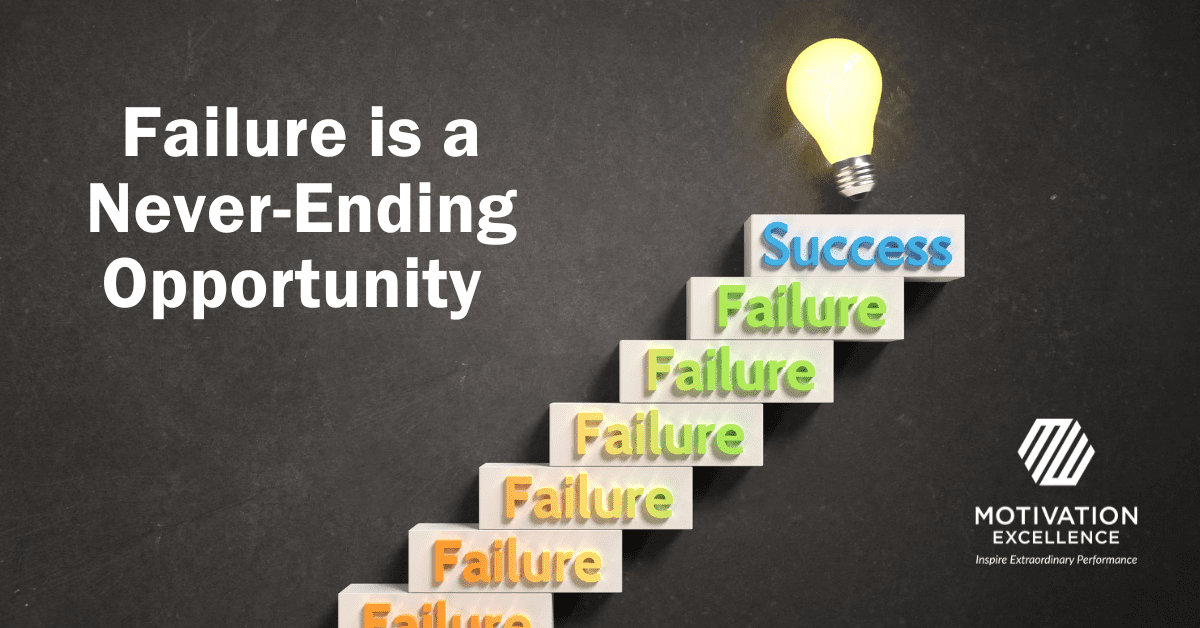 Well, folks, it’s a new year. For many, that means resolutions. And for many of those people, it means failing those resolutions within the first month. And there we have it…using the word “fail” right off the top of a new year. There are reasons people often fail at New Year’s resolutions and ways to fix them, as we wrote about in a past blog, but this post is about why failure is not an ending or the opposite of success.

Did you know there’s an official psychological diagnosis for people paralyzed by their fear of failure? It’s called atychiphobia. (In case you have a fear of mispronouncing words, say it like this: a-tick-eh-fo-be-ah.) The Atlantic author, Arthur Brooks, writes that people who suffer from this malady are more prone to anxiety, depression and a lack of enjoying life’s adventures. He writes about three steps you can take to overcome what can be a quite debilitating condition.

People who are afraid to fail, often don’t take risks in the first place. We’re talking about small risks (talking to a stranger at a work conference) as well as big ones (investing your life savings in a start-up). Without taking risks, your levels of failure and success are pretty much flatlined. Being in a place where you can take calculated risks is preferable. Remember, the thrill of victory is greater when you’ve also experienced the agony of defeat!

The Pros of Failure

BetterUp.com states the biggest problem with failure is our own perception. It can take a nasty toll on our self-esteem. If you can create opportunities to feel successful along the journey, then the final outcome doesn’t have to be a make-it or break-it situation. Read our take on celebrating small victories on the way to a big goal here.

Setting yourself up for mini successes is a great way to keep motivated. But experiencing failure is absolutely OK and often critical to your ultimate success down the road. PsychologyToday.com writes about three positives of failure that many don’t initially think about.

In addition to the above three, failing is a great teacher! We all learn how not to do something with each step backward. Being a lifelong learner is critical to leadership, empathy and a growth mindset. People with those traits see each failure as an opportunity to leap forward. It all comes down to owning a positive perspective.

Come Fail Away with Me

If you’re singing the classic Styx song, “Come Sail Away,” in your head now, it was planned by your author. 😊 Dennis DeYoung, frontman for Styx, said in a 2021 interview with Blabbermouth.com that the group’s 4th album, “Man of Miracles,” was a complete failure. It led to no one wanting to represent them until a radio program director surprisingly started playing, “Lady,” a song from a previous album, and it hit big. Obviously, that led to a litany of great songs, including, “Come Sail Away,” which some say pushed them into superstardom.

This leads to an interesting question. There are an incredibly large amount of people in the world who are talented but never succeed at the levels of a band like Styx. Does that make them all failures? I hope your answer to this is a resounding “no!” Sometimes success relies on a lightning strike of good fortune and that is obviously out of our control. In cases like this, the failure would be to not continue trying, regardless of the eventual outcome. And that, my friends, is why resilience is the best friend to both failure and success!

Happy New Year – now go on out there and try, fail, succeed, fail again and keep on going!