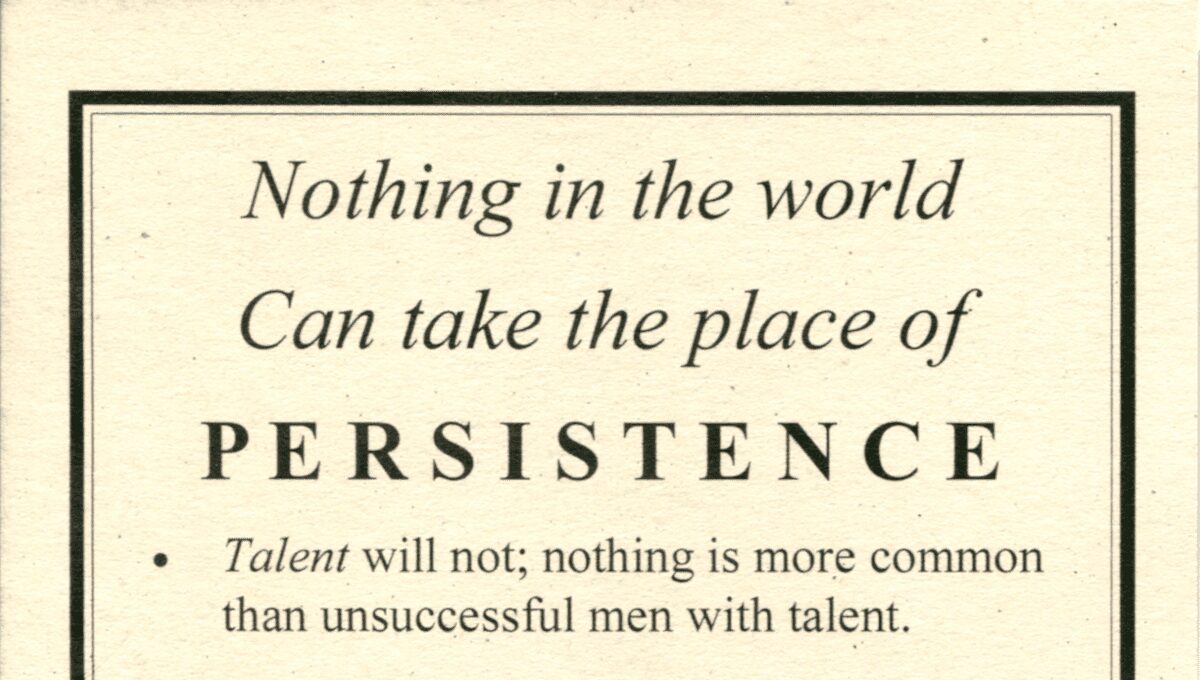 The street of success is paved with a great number of stories about persistence and perseverance.

If any of these people, or the countless others at the top of their field, had pushed their passion aside after multiple rejections our world would be a lot less dynamic; The street of success dimpled with potholes.

The mere fact they kept doggedly after their goal is an achievement in itself! How often do you find yourself knocked down and depleted of the desire to push forward again? Imagine getting knocked down 60 times, like Kathryn Stockett did after writing The Help. Her book ended up on the New York Times bestsellers list for more than 100 weeks and was made into a successful film. But 60 literary agents rejected it! I don’t have to tell you what became of Micheal Jordan, do I?

Persistence is, in fact, one of the traits of highly successful people. How do you become persistent? Is it something that can be learned and practiced? While, some of it does come from natural inclinations, there are definitely tips and tricks you can incorporate to enhance your, let’s say, stubbornly purposeful streak.

After reading several variations of habits and traits of persistent people (see links in blog), here is a quick and easy breakdown to get you started down the road of persistence.

Perhaps you’re aren’t hoping to write the next American novel. Instead, you want to make daily life at work more pleasant by starting a snack bar. It may not be a Nobel Peace Prize level goal, but worthy to go after nonetheless! And it might just take persistence to get it done, depending on the levels of approval you need to go after.

Being persistent while not being annoying is also quite the skill itself. If it wasn’t, toddlers – and adults who act like them – wouldn’t be so exasperating! The lesson here is to be creative in your approach so you don’t get the “broken record” look of exhaustion. Successful salespeople have to navigate this space daily.

Business Development Director at Motivation Excellence, Rebecca Steiner, says she tries to delicately balance her desire to follow up with a client or prospect with what she thinks their needs are. “I put myself in their shoes and ask myself if I have the answer to their problem or a solution that fits their need. If I feel like I do, I keep moving forward. Having empathy for what they’re going through helps me determine my level of persistence.”

Steiner’s favorite quote on persistence comes from 30th President of the United States Calvin Coolidge. Rebecca and her husband have had this poster in their house for decades!

Steiner also says changing up the way she reaches out to a person of interest is important. “It can’t always be an email or a voicemail. Sometimes it’s a video message or even a coffee mug with a small package of gourmet coffee and a hand-written note. If you can key into something the person is passionate about, the touchpoint resonates more.”

Most importantly, Steiner says, it’s all about being positive. “I’m there to keep their mood up and bring solutions that will help them, not be another chore on their list for the day.”

Steiner also advises that timing isn’t always right, which makes persistence all the more important. “Early on in my sales career I reached out to a prospect. I built a relationship with him and kept in contact for years with no luck converting a sale. After 10 years, the business opened up and he turned to me and said, ‘Your persistence finally paid off!’”

Sometimes the biggest difference between someone who succeeds and someone who doesn’t, is that the former persisted and the latter quit. As you’re heading out on the road to your goals, big or small, remember that each step you take places you closer to the destination. Pave your road with persistence. It may not be the smoothest ride, but it’ll be a worthwhile journey that can take you all the way to the top!